Well known for its vibrant and welcoming culture, high-quality seafood, and coastal landscapes, people from around the world have been visiting Atlantic Canada for centuries. The story less-often told is of the many international companies who have invested—and are thriving—in the four most Eastern provinces of Canada.

Multinationals such as IBM, Samsung, Kvaerner, Tech Mahindra, and Michelin have realized the operational and strategic advantages found in Atlantic Canada.

Read on to discover what advantages Atlantic Canada offers for your business as well.

Located on Canada’s East Coast, the Atlantic region features these advantages and more. The region is comprised of the provinces of New Brunswick, Nova Scotia, Prince Edward Island, and Newfoundland & Labrador. It has a collective population of 2.4 million and GDP totalling $105.8 billion. 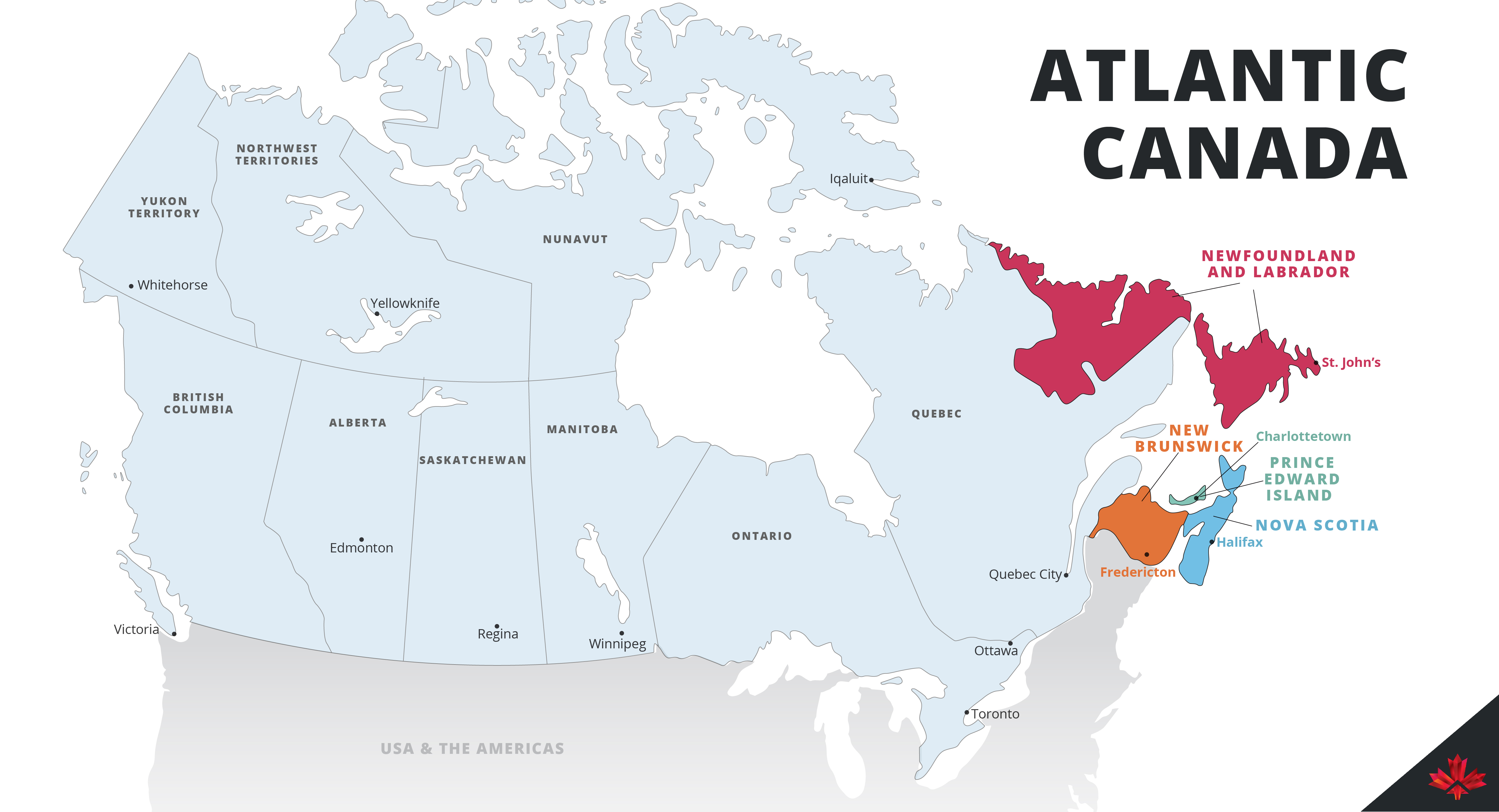 Atlantic Canada is appealing to investors looking for a loyal workforce that values work-life balance and an affordable cost of living. The average residential real estate cost in the region is just over $240,000 CAD, the average commute time rests just under 20 minutes, and average job tenure in service-based industries is just under 9 years.

Additionally, each of the Atlantic provinces have award-winning universities and offer top-ups on the federal Scientific Research & Experimental Development tax credit making it a great place for R&D activities.

Read more below to learn more about how each province in Atlantic Canada is making waves in its own niche industries.

Although Prince Edward Island (PEI) is Canada’s smallest province, it is growing. According to population estimates by Statistics Canada, the province of PEI witnessed the highest population growth in Canada from 2018 to 2019.

Much of this growth can be attributed to the region’s favourable immigration policies, such as the Atlantic Immigration Pilot, which helps employers hire foreign talent who want to immigrate to one of the four Atlantic provinces, as well as international graduates who want to stay in the region after they graduate.

Hiring international students, who have unique perspectives and experiences to offer, has presented a tremendous opportunity for employers. The Atlantic provinces are home to 16 public universities, as well as 43 community college campuses that attract more than 112,000 students—34,050 from outside of Canada—annually.

Interestingly, PEI’s international student population grew nearly five-fold since 2010—the strongest growth among all provinces and territories. Coupling this growth in students with welcoming immigration frameworks reveals an available and sustainable workforce that multinational companies benefit from.

One such industry that has attracted considerable international attention is PEI’s Bioscience Cluster. Based in the provincial capital, Charlottetown, the Cluster is comprised of more than 60 companies, seven research institutions, and North America’s first business accelerator dedicated to the commercialization of technologies based on natural product chemistry. Multinationals who have invested in the Cluster include Japan-headquartered Sekisui Diagnostics (with its only Canadian location) and UK-based Croda International (with its International’s Centre of Innovation for Marine Biotechnology).

The oil and gas industry in Newfoundland and Labrador supplies 100% of Canada’s offshore petroleum and hasn’t even yet reached its full potential. Over 22 years, 1.7 billion barrels have been discovered, however, this represents just a drop in a much larger bucket. It is estimated that there is an additional 52.2 billion barrels of oil still to be discovered in just 9% of the province’s offshore area. With deep-water exploration projects on the horizon, Newfoundland and Labrador has stepped up as a Deep-Water Centre of Excellence.

Built on the energy industry’s significant advancement, Newfoundland and Labrador has a vibrant and diversified ocean economy—one of the largest in Canada. In fact, Canada’s Ocean Supercluster, one of Canada’s innovation initiatives is headquartered in St. John’s, Newfoundland. Canada’s Ocean Supercluster is a transformative cluster model that is driving cross-sectoral collaboration, accelerating innovation, and growing Canada’s ocean economy.

The industry is bolstered by strong research and development capabilities and an expertise for collaborating with industry. 40% of all research at Memorial University is related to the ocean. A significant portion of this research is conducted at The Fisheries and Marine Institute—Canada’s most comprehensive centre for education, training, applied research and industrial support for the ocean industries. The Institute is home to the world’s largest flume tank, 2 of only 5 full-motion ship's bridge simulators in the world, and more than 20 industry-driven marine programs that range from technical certificates to master's degrees. Beyond industry-driven R&D, the Institute produces graduates that are well-equipped to succeed in the workforce.

In addition to leading the nation in offshore opportunities—whether it be in energy or technology applications—St. John’s, Newfoundland has made history in venture capital deals. Verafin, a financial crime management company, attracted the largest-ever venture capital deal in Canadian history—raising $515 million in 2019.

Bordering Quebec and the US, there are 55 million consumers within a 1,000 KM radius of the province of New Brunswick. It also benefits from the fastest average download speeds in Canada with 140.35 Mbps.

This fall, the National Centre for Cybersecurity will open in Fredericton, New Brunswick. This Cyber Centre will also be housed in the city’s Innovation District Hub and high-tech cluster, Knowledge Park.

The Centre will feature the most advanced testbed and Centre-of-Excellence for Cyber Defense and Critical Infrastructure Protection (CIP) in Canada, testing and validation facilities, training labs, as well as an IoT security innovation lab and incubator.

Things are happening in Nova Scotia. Last summer it was announced that its capital city of Halifax was one of the fastest growing metropolitan regions in Canada, with a population growth rate higher than Toronto, Montreal, or Vancouver. But opportunity exists beyond the capital; from financial services to game development, naval defence, ocean technology, and advanced manufacturing, international investors have chosen Nova Scotia as a strategic location for decades.

Michelin North America has manufactured 230 million tires in the province since 1971. The French multinational employs 3,300 people across three plants in the province—making it the largest private manufacturer in Nova Scotia. In 2018, the company announced a $21 million dollar expansion to its facility in Pictou. As a result, 85% of Michelin's North American volume for the new X-Ice SNOW tire will be produced in the newly upgraded plant.

The province is also the home to DSM Nutritional Products, the world’s #1 manufacturer of concentrated fish oils—an appropriate reflection of Nova Scotia’s maritime heritage and expertise in ocean industries.

Concerning its ocean industries, the province showcases diversification again. From seafood to marine transportation, tidal energy, and naval defence, ocean industries employ almost 35,000 Nova Scotian workers. The crowning jewel of the industry is the Centre for Ocean Ventures and Entrepreneurship (COVE)—a collaborative facility for applied innovation in the ocean sector that offers international investors a unique place for a ‘soft landing’ in the province.

In Nova Scotia, there are more graduates in engineering, applied science, mathematics, and physical science per capita than anywhere else in Canada. Attracting attention from top tech leaders, graduates are well-equipped to work with employers like IBM, Ubisoft, and EY. Investors can rest assured that there is a sustainable supply of top talent thanks to the province’s 10 universities and 13 community college campuses. In fact, in the last three years, Nova Scotia has seen a 50% growth in computer science and math enrolments, contributing to this growing pool of talent.

Atlantic Canada has something to offer investors from different industries, from around the world. If you haven't considered Atlantic Canada as your next expansion destination, you're missing out. Dive a little deeper into Atlantic Canada; its rapid growth, diversity, and expertise just might surprise you.

Through its regional office, Invest in Canada works with partners in Atlantic Canada to connect global investors with business opportunities. To learn more about each of these organizations, visit their websites: OpportunitiesNB, Ignite Fredericton, Nova Scotia Business Inc., Halifax Partnership, Cape Breton Partnership, Innovation PEI, the City of Charlottetown, the Government of Newfoundland & Labrador, and the City of St. John’s.

Ready to get started? Contact us now to discuss your business expansion project. 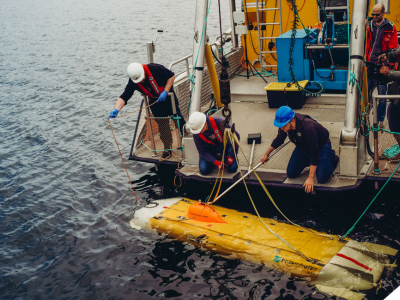 Investing in oceantech: The benefits of dropping an anchor on Canada’s east coast

Atlantic Canada is home to diverse industries, from marine transportation, ocean energy, defense and security to fisheries and aquaculture. Canada’s East Coast is the epicentre of oceantech innovation and is attracting global companies. 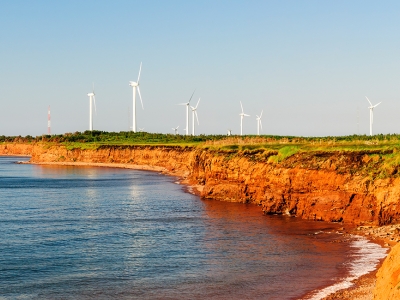